Isn’t it time we learned to ‘speak peaceably’

Posted on December 7, 2017 by rabbihammer

There are two vital statements in this week’s Parsha which are most significant for us as a people, nation, and on a smaller scale as a family.

We are all familiar with the story of Yosef and his brothers; the jealousy and even hatred that existed between them and the catastrophic consequences that ensued as a result of that hatred. The Torah describes the brother’s hatred towards Yosef as,
“…they hated him; and they could not speak to him peaceably”.

Perhaps Yakov did speak with his sons but he did not ‘speak peaceably’; he probably did not have heart to heart conversations with them to appreciate each one of their personalities and accentuate their strengths. In fact it appears he only does this when he is on his death bed and he offers each son a blessing in accordance with their unique personalities. What Yakov did immediately prior to his death, does not appear to be something he did while he was living. Perhaps the brothers and Yosef did speak to one another but they did not ‘speak peacebly’; they did not enjoy a comradery as many brothers do and they did not seek to understand each other’s feelings as they were uninterested in preserving a familial relationship.

Unfortunately our history has a nasty habit of repeating itself. The organization I started four years ago, Makom Meshutaf, offers Jewish programming without a religious agenda, to secular Kibbutzim and Moshavim throughout the country. I guess you could say that Makom Meshutaf bridges gaps and creates initiatives. A week ago we ran a panel in Kibutz Tzora which consisted of a secular Israeli, Religious Zionist (me) and a Haredi woman. It was a fascinating program and something we are promoting in kibbutzim throughout the country to demonstrate that there are differences between all of us, precisely why we need to engage in dialogue. The secular Israeli who we invited came with blatant anti-sentiment towards our beliefs and a bitter attitude, it was very upsetting. While I understand that everyone has varied perspectives, we have to at least be able to ‘speak peaceably’ and show respect towards other’s opinions.

Today I tried to speak with someone from a Kibbutz who is in charge of its culture. He would not even grant me the time of day and as I began my explanation of what we are trying to do, he stopped me abruptly, told me not to call him again and put down the phone; once again an obvious failure to ‘speak peaceably’ and listen.

A few weeks ago I wrote about our daughter, Nechama who is a chayelet in the army and the only religiously observant girl in her unit. She called me this past week and told me that as part of her course they have an exam every week and her commanding officer puts a random bonus question on the exam as well. That week the bonus question was to write down the words to the song “Echad Mi Yodea – Who knows one?” from the Pesach Hagadah. Sadly, Nechama was the only one who got the bonus question correct. Yet following the exam, naturally all the chayalot came to ask Nechama what the bonus question answer was and she ended up teaching them the entire “Echad Mi Yodea” song which has now become the ‘theme song’ of their unit. Only when we ‘speak peaceably’ can we hope to reveal to others that they too know the answer to “Who knows one?”.

This week Nechama’s sergeant had a heart to heart with each soldier privately. Nechama expressed to her that she was a bit disappointed in the lack of motivation at times by some of the girls. Her unobservant sergeant responded,

“Remember Nechama all the girls who are here are not observant which means that they have to serve in the army; they don’t necessarily want to be here. You on the other hand are observant, you had other options to choose from other than the army, but you chose to be here. Between you and me, as an observant girl you are more motivated because you have something to believe in. It is this belief which provides you with resilience and a strength that other people don’t have”.
Only those who ‘speak peaceably’ can reveal to others that they too know the answer to “Who knows one?”.

Later in the Parsha we come across the second vital statement as Yakov sends Yosef off to see his brothers and he does so by saying,

“Go now, look into the welfare of your brothers…”. Yakov is not sending Yosef merely as a messenger; he is sending Yosef as an ambassador of peace; he now sends him to ‘speak peaceably’ to his brothers after all of the ill will that festered between them. He asks Yosef to ‘look into the welfare’ of his brothers by seeing them in a more positive light, but it is too late.

Perhaps it would do us well to put aside our differences and learn to ‘speak peaceably’ to one another. Perhaps it is time for us to recognize that our resilience and strength stems from our ability to ‘look into the welfare of our brothers’; those brothers of our past did not do a very good job at it, but it seems that the sisters of our present are doing a fine job indeed. 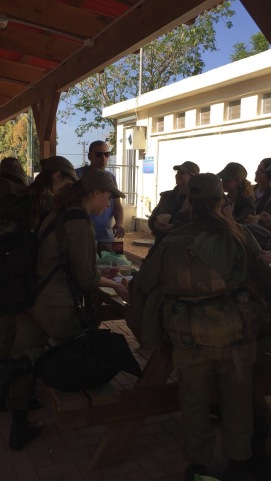 View all posts by rabbihammer →
This entry was posted in Hammer Time. Bookmark the permalink.